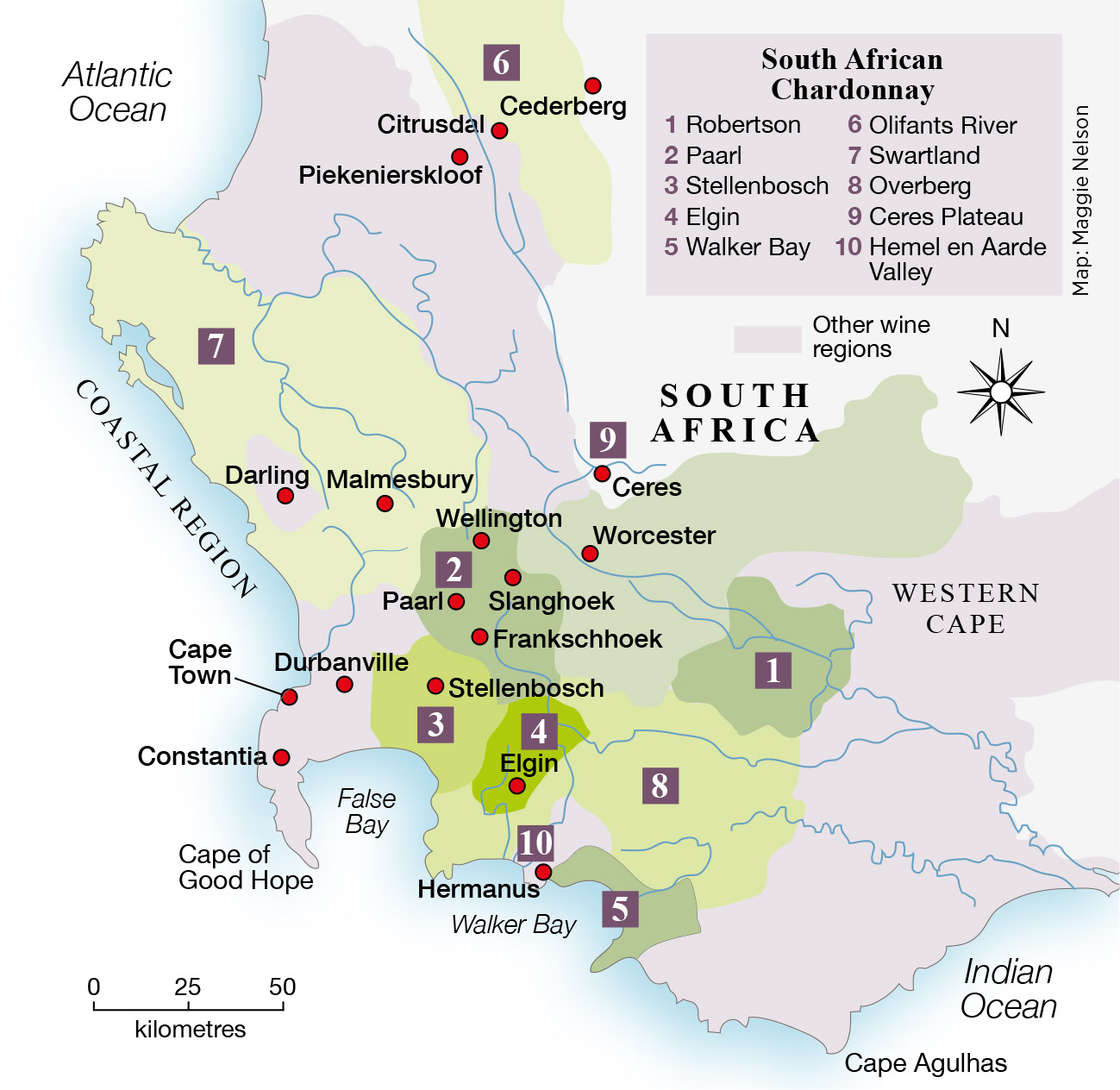 After poor clones and imposter imports, this grape has come a long way in 30 years, says Tim Atkin MW. When planted in the right place, it can produce world-class wines.

By the standards of some white grape varieties, Chardonnay is a relative parvenu in South Africa. Chenin Blanc, Muscat and Semillon were probably there from the start of the Cape colony, imported from Europe, but it seems Chardonnay didn’t fancy the arduous journey south. It didn’t turn up until the 1920s, when it was planted in an experimental vineyard at the University of Stellenbosch. The chosen clone was a flop, but that was the material that was propagated and planted in the 1970s, when interest in Chardonnay began to develop.

It was time to get some better plant material. Faced with rigorous quarantine regulations, most producers despaired of using official channels. That was how Auxerrois came to be shipped, illegally, from Germany via Alsace. The new ‘Chardonnay’ vines adapted well and were widely distributed in secret – even winning international medals – until the authorities found out what had happened and ordered it to be grubbed up.

The first new bona fide Chardonnay clones to enter South Africa also did so under cover. Peter Finlayson, then the winemaker at Hamilton Russell, brought in some cuttings from California via neighbouring Swaziland. He, too, ended up in the dock as part of the 1986 Klopper Inquiry. But this time it was clear that, planted in the right place, Chardonnay had a future.

That was just 30 years ago, which shows how quickly the variety has established itself. Since 1992, producers have been free to plant where they want in the Cape – they were subject to stringent quotas before that – and that has resulted in the development of the sort of cool-climate areas, especially in Elgin, the Overberg and Walker Bay, where Chardonnay performs at its best.

Today, Chardonnay is planted in all of South Africa’s wine regions from Olifants River to Paarl, the Swartland to Stellenbosch. The biggest plantings are in Robertson, where the blend of limestone soils (rare in the Cape), cool afternoon breezes and high yields have made it very popular, especially for sparkling wine production.

There are a growing number of areas where Chardonnay is at home – the Ceres Plateau is the most recent – but, for now at least, most plantings aren’t in the best places. Elgin and Walker Bay, which garner the majority of medals and high scores with Stellenbosch, have only 204 hectares between them. Swartland, where it’s hot enough to grow Rhône varieties, has 342ha.

Chardonnay is capable of making almost any style in South Africa – it’s a chameleon grape after all – but if it’s going to make a greater number of world-class wines, it needs to be planted in the right areas.

Total plantings
7,061ha (out of 98,597ha). Chardonnay is the fourth most planted white grape in the Cape after Chenin Blanc, Colombard and Sauvignon Blanc.

Tim Atkin MW is an award-winning writer and leading commentator on the Cape’s wines, and publishes an annual report on its wines at timatkin.com

This website uses cookies to improve your experience while you navigate through the website. Out of these, the cookies that are categorized as necessary are stored on your browser as they are essential for the working of basic functionalities of the website. We also use third-party cookies that help us analyze and understand how you use this website. These cookies will be stored in your browser only with your consent. You also have the option to opt-out of these cookies. But opting out of some of these cookies may affect your browsing experience.
Necessary Always Enabled
Necessary cookies are absolutely essential for the website to function properly. These cookies ensure basic functionalities and security features of the website, anonymously.
Functional
Functional cookies help to perform certain functionalities like sharing the content of the website on social media platforms, collect feedbacks, and other third-party features.
Performance
Performance cookies are used to understand and analyze the key performance indexes of the website which helps in delivering a better user experience for the visitors.
Analytics
Analytical cookies are used to understand how visitors interact with the website. These cookies help provide information on metrics the number of visitors, bounce rate, traffic source, etc.
Advertisement
Advertisement cookies are used to provide visitors with relevant ads and marketing campaigns. These cookies track visitors across websites and collect information to provide customized ads.
Others
Other uncategorized cookies are those that are being analyzed and have not been classified into a category as yet.
SAVE & ACCEPT